
Back to all Insights

The Drivers of Extractive Technology

This post is part of The Catalyst newsletter series. Subscribe here for new resources 2x a month. 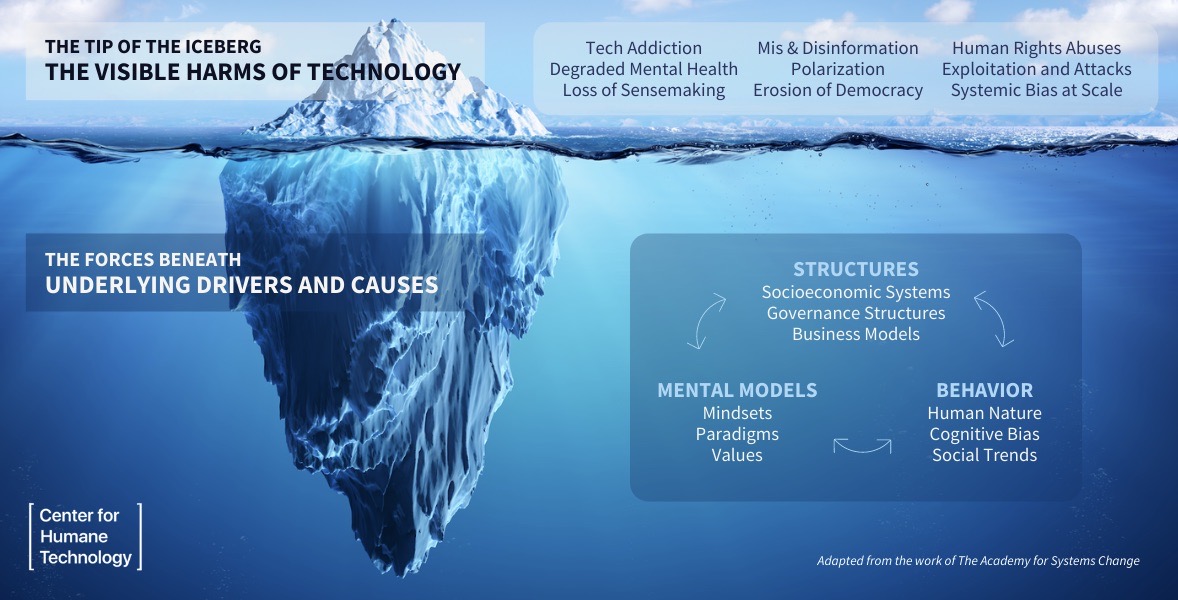 This iceberg model has been adapted from the work of The Academy for Systems Change.

When looking at the problems we face and the changes we want to make in the tech ecosystem, it’s easy to focus on the harms of technology – the things that affect us and those we care about. However, these harms are just the tip of the iceberg of the extractive tech ecosystem. We’ve found that looking beneath the surface of these harms, to the drivers that generate them, is one of the most powerful ways to understand the issues and identify where action can lead to change.

THE TIP OF THE EXTRACTIVE TECH ICEBERG

It’s useful to remember that many of the harms of technology – from degraded mental health to polarization to systemic bias at scale – are unintended side effects of the tech system. Because they are results of the system, they are not separate problems, but rather are interconnected. Technology’s greatest harms result from the interplay of three underlying drivers: 1) mental models, 2) structures, and 3) behaviors.

We’ve seen a growing recognition of technology’s harms as they have become a regular conversation topic and have prompted a groundswell of proposed policies and legislation. But making an impact that recalibrates the extractive tech ecosystem—not just minimizes its harms— requires addressing the forces beneath.

BENEATH THE SURFACE: THE DRIVERS OF TECH HARMS

The tip of the iceberg, the visible harms of technology, are driven by technology’s interaction with our mental models, our structures, and our behaviors. These driving forces are part of a dynamic, changing system with feedback loops between the forces themselves as well as the harms they generate.

MENTAL MODELS include our mindsets, our values, and our cultural paradigms. For example, the idea and operating paradigm that growth is intrinsically good has generated mechanisms, such as measuring success according to GDP, which determine everything from our wages to our priorities.

STRUCTURES such as our socioeconomic systems, governance institutions, and business models are mechanisms that influence behaviors. In a socioeconomic system that prioritizes financial gain, companies may fixate on what will drive up stock prices, even at the detriment to society.

BEHAVIORS can include actions, as well as social trends, cognitive biases, and our own human nature. For example, “growth is good” and “winners take all” thinking can lead to trends like Silicon Valley’s “move fast and break things” mantra and result in widespread harm.

THE INTERPLAY BETWEEN DRIVERS

It’s worth reiterating that these drivers don’t interact linearly, but impact each other. Continuing with the example above, a polarized society is less likely to agree on a new operating paradigm to replace “growth is intrinsically good” or elect politicians that can enact governance structures to rein in Big Tech’s operating model. This results in continuous feedback loops for the existing operating models, creating a runaway system.

The first step to changing the system is to understand how it works. The second is to figure out what tools can help us change it.

Whereas extractive systems exhaust resources by removing them faster than they replenish, regenerative systems protect and enrich what they depend on. For example, a regenerative technology ecosystem would:

There are endless ways to shift the technology ecosystem toward a more regenerative model; however, the most powerful is changing the operating paradigm. There are many powerful tools we have at our disposal to help shift our mental models such as courses to conversations to communities of practice. As a starter, our most recent podcast episode explores how science fiction can help us comprehend and prepare for ungraspable phenomena:

“ Hyperobjects are problems that are so complex so diffuse so massive that they’re hard for us to take in … We're faced with these hyper object scale problems that are beyond our ability to really sink our teeth into and the medium of climate science fiction is just so unique in being able to bring us into, a reality that we're already living in.”

Beyond tools like science fiction for expanding our thinking, how else can we get there? We introduced a Framework for Changing Complex Systems a few months ago, inspired by Donella Meadows’ 12 Leverage Points to Intervene in a System. This preliminary framework provides a way to understand types of interventions in the extractive tech ecosystem and their different degrees of impact.

WHAT WE'RE READING, LISTENING TO, & WATCHING

Published on
February 17, 2022
by
Camille Carlton and Maria Bridge